The Basic Command command in Linux – who is not familiar with linux OS system with high security and of course free (OpenSource). As buddy know Linux Command Line Iterface are known by in brief (CLI). and company or most people using linux as the Server or in use everyday.

A computer user has now risen unlike in the old days, the main operating system Linux as the most reliable and of course free. In addition to its open-source Linux operating system, it is also much more demanding us to continue to learn it. 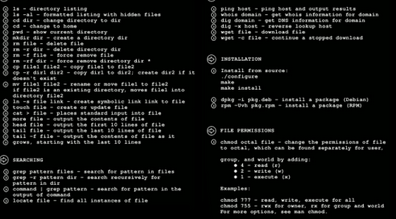 Even at this time, Linux has already entered the world of education. Thus, the development of Linux users could very much. For that, there is no harm if we also learn the operating system on this one. Because Linux is identical to the use of the Console Terminal that requires us to memorize commands. Even though it’s been a lot of Linux that has a GUI version (Grapichal User Interface), but nonetheless the name Linux was synonymous with the use of basic commands in Terminal.

Here are a few Basic Commands in Linux Command that must be known:

Maybe a little bit used to Command basic commands in Linux and I will discuss next, the above command can be used for Debian Linux, Ubuntu linux, Linux Centos, Linux Distro or other Time the following if anyone asks what that CLI is a Command Line Interface detail the interface does not provide a graph, either in the form of pictures, Windows or animation-animation that can spoil the user , but only in the form of text that must be typed by the user.