As the need for communication is growing, we are finding more creative ways to be able to help each other. People use different devices and software to access each other easily, even when they’re traveling. 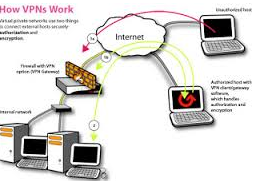 What Is A VPN? VPN stands for Virtual Private Network. VPN is a network that is constructed by using public wires to connect nodes. This creates a secure network connection via a public network such as the Internet or a private network owned by the service provider. Large companies, educational institutions, and Government agencies use VPN technology to allow remote users to securely connect to the private network. A VPN is working by using the shared public infrastructure while maintaining privacy through security procedures and protocols such as tunneling Layer Two Tunneling Protocol (L2TP).

What is remote desktop? Remote Desktop Connection is a technology that allows you to sit in front of the computer (sometimes referred to as the client computer) and connect to a remote computer (sometimes called the host computer) in a different location. Remote desktop connectivity relies on one of a number of protocols, including Remote Desktop Protocol (RDP), Virtual Network Computing (VNC), NX technology and Independent Computing Architecture (ICA).

What is the difference between a VPN and remote desktop?

Both the VPN and remote desktop application that provides remote access to certain information in the network. But there are significant differences between the two. The differences between remote desktop and VPN applications is that the first allows access and control to a particular computer, while a VPN enables access to shared network resources.

Regarding security, remote desktop less secure and can easily be hacked while VPN provides encryption at the level of high security. A Virtual Private Network (VPN) is just that, a personal network. VPN runs on top of a larger network, such as a corporate network you will find at an office building. Instead, the remote desktop is usually a remote control from individual computers, which may or may not be on the network.

Virtual private network (VPN) uses encryption to provide a secure means to connect to a remote network via the Internet. Effectively, they provide “virtual” physical access to the network as if you were physically in the Office. Remote access systems, such as Microsoft Remote Desktop Connection, Virtual Network Computing (VNC) and similar products, allowing you to connect to the computer over the network and manipulate with a mouse and keyboard as if you were sitting in front of the computer.