Emoji is derived from Japan which means pictures and letters. Emoji is a term used by Japan in the sms or the web page. When the early Android out use of emoji are still lacking. Emoji alone can represent an emoticon in one our feelings rather than having to type words that are very long. Android first with the difference now is that it used to be only third-party applications that support the emoji for android version beginning and can only receive and read SMS or emoji from iPhone and others. However, with the arrival of the Jelly Bean then android is not only able to receive emoji but also can write it. How do I write an emoji in android? Here I will explain how to enter and write emoji from android. 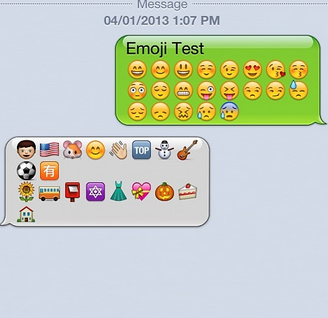 If you wish to see more empty boxes that means android you can not read the emoji characters. The solution is you have to use a third party application like WhatsApp, Hangouts, Handcent SMS, SMS Go Pro with emoji plugin. The other solution is to Root Android font and install emoji.

So we can use the emoji easily using third party applications like the Emoji Keyboard, Go SMS Pro, Handcent SMS, Hangouts and WhatsApp. How to make your own Creations-Emoji dictionary I myself have never tried to make it, but I wanted to show how so that we can determine our own version of emoji dictionary. We can use the Kii and Multiling but better we just use Google keyboard in General only. For the sake of convenience, install visual keyboard like other android Emoji iWnn IME, Kii, Multiling, etc. From the menu Settings–>Language & Keyboard (and input)–> Android Keyboard–> Select Personal Dictionary (sometimes not all android devices in the same stride). Under the emoji characters, enter the Phrase as you wish. Use the emoji keyboard visual which you have installed previously (if not here). For example on the Shortcut we fill the dog or to taste example that annoyed us. Furthermore every time we write a word that annoyed then emoji icon will appear the dog’s head.

So that’s probably just the tips and trick that you can take advantage of the emoji characters if you want that special that we interpret it yourself. If you are confused.